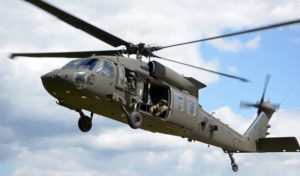 The ITEP engine is to power U.S. Army Blackhawks, like this one, and Apaches.

The Advanced Turbine Engine Company (ATEC) on Feb. 19 lodged a protest with the Government Accountability Office on the U.S. Army's recent decision to award General Electric a $517 million Engineering and Manufacturing Development (EMD) contract for its next generation of Black Hawk and Apache helicopter engines -- a contract likely worth billions of dollars as the new engines are also to power variants of the Army Future Vertical Lift program, including the Future Attack Reconnaissance Aircraft (FARA).

ATEC is a joint venture of Honeywell International Inc. and Pratt & Whitney.

Craig Madden, the president of ATEC, said that his company "clearly offered the best value through a combination of a highly rated and technically superior engine that was judged to be much lower risk, and believe we did so significantly under the government's budget."

The Improved Turbine Engine Program (ITEP) seeks an engine that is 50 percent more powerful, 25 percent more fuel efficient, and lasts 20 percent longer than the current Blackhawk and Apache T700 engines by GE -- engines that GE said have run more than 100 million flight hours with the Army.

In the competition, GE’s single-spool T901 engine beat out the dual-spool T900 offered by ATEC.

For its part, GE said that it has already started work on the EMD contract. Dave Wilson, a spokesman for GE Aviation's Military Systems Operation, wrote in an email that Army Contracting Command "conducted a comprehensive and well-organized process with clearly defined requirements and a level playing field for both competitors."

"We put forward a very compelling proposal with the T901, which meets or exceeds all Army requirements for the ITEP program," Wilson wrote. "We are very confident the Army’s very thorough review and evaluation of the competing bids will be upheld and that the T901 will prevail."

GAO has 100 days to review the contract decision before issuing a ruling.

If GE prevails, it will perform the ITEP work in Lynn, Massachusetts, with an estimated completion date of Aug. 1, 2024.

ATEC officials touted its dual-spool technology as common to many fixed-wing aircraft, citing advantages including increased power and fuel efficiency.

Dual-spool core architecture has been around since the 1940s and can improve engine performance. Many engine manufacturers, including GE, use the design in larger engines for fixed-wing applications.