In the report, titled “F-35 Aircraft Sustainment: DOD Needs to Address Substantial Supply Chain Challenges,” the office lays out eight recommendations for the Pentagon to work on – together with the Under Secretary of Defense for Acquisition and Sustainment and the F-35 Joint Program Office (JPO), as well as relevant services as required –  to “close the gap between warfighter requirements and F-35 supply chain performance; and address challenges with deployments, global parts movement, and spare parts accountability.” 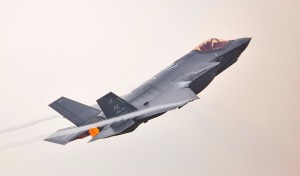 The office attributed the lower-than-desired mission-capable rates to F-35 spare parts shortages and a difficulty in managing and moving parts around the globe. The Joint Strike Fighter, built by Lockheed Martin [LMT], is equipped with components produced by suppliers in nine separate countries, and two out of three final assembly and check out facilities are overseas – in Cameri, Italy, and in Nagoya, Japan.

The report stated that F-35 aircraft were unable to fly for nearly 30 percent of the May to November 2018 timeframe due to spare parts shortages, and that the Pentagon has a repair backlog of about 4,300 parts.

“DoD is taking steps to fix these issues, such as improving the reliability of parts,” the report said. “However, it has not fully determined actions needed to close the gap between warfighter requirements and the performance the F-35 supply chain can deliver.”

Another issue is mismatched parts for deploying aircraft. Since the Pentagon purchased certain F-35 components years ahead of time to support deployed platforms, those parts may not fully match the services’ needs as F-35s are modified over time. The report stated that 44 percent of purchased parts were incompatible with F-35Bs that the Marine Corps recently took on a deployment. “Without a process to modify the sets of parts for deployments, DoD may be unable to meet the services' operational needs.”

The GAO also asserted that the Defense Department and its partners had “an immature global network” to move parts for the F-35, noting that overseas customers have experienced long wait times for parts needed to repair aircraft. “Without a detailed plan for the network, DoD may not be ready to support an expanding fleet,” the report said.

Affordability continues be an issue for future F-35 sustainment. The Air Force and Marine Corps have each expressed the need to reduce their sustainment costs per aircraft per year by 43 percent and 44 percent, respectively. But the Pentagon does not currently hold records for the billions of dollars-worth of spare parts it has procured, where they are or how much they cost. The department “lacks the necessary data” to even maintain a database with information on U.S.-owned parts, the GAO found.

“Without a policy that clearly defines how it will keep track of purchased F-35 parts, DoD will continue to operate with a limited understanding of the F-35 spare parts it owns and how they are being managed,” the report said. “If left unaddressed, these accountability issues will impede DoD's ability to obtain sufficient readiness within affordability constraints.”

The Defense Department concurred with each of the GAO’s recommendations.

The GAO report did not detail the possible ramifications of the Pentagon’s recent move to halt deliveries of the F-35A to Turkey and suspend production activity there in response to Ankara’s decision to procure the Russian-made S-400 anti-aircraft system. Acting Chief Pentagon Spokesman Charles E. Summers Jr. said April 1 that the department is seeking secondary sources of supply for Turkish-produced parts (Defense Daily, April 1).

US Military Rotorcraft: A Week in Photos